The North American Monsoon (NAM) is a major delivery system of water to the interior of the American Southwest, the Sonoran Desert in particular. The NAM usually peaks in the mid to late summer, arising from the south over the Sonoran desert (Adams and Comrie 1997; Higgins et al. 1997; Metcalfe et al. 2015). But the NAM has been inconsistent over the historical period, and even more drastic changes over the pre-contact period of human occupation (Jones et al. 2015). 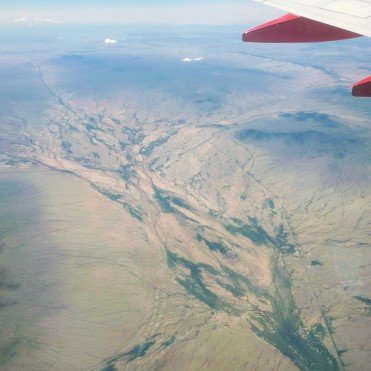 Washes (arroyos) in the desert Southwest, west-central Arizona, following a monsoon event. Image colours and contrast have been modified to highlight the plant life that emerges rapidly to photosynthesize in the event of a flood. 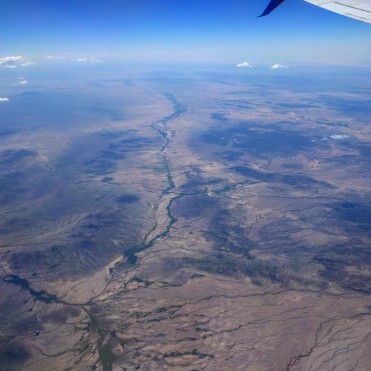 Probably the Gila River, Arizona. Colour and contrast modified to highlight the flora that has emerged following the rains, in the stream beds and on land which varies ever so slightly in elevation.

Between ~850-1350 CE, the Northern Hemisphere was warmer than the millennial average by about 0.5°C. This was the so-called Medieval “warm period” (Mann et al. 1998; Moberg et al. 2005; Christiansen and Ljungqvist 2012). But since changes in the climate of the Southwest are characterised more by hydrographic drought than by temperature,  the term Medieval Climate Anomaly (MCA) is preferred, following Stine (1994) who noted its coincidence with extraordinary drought events. The paleoclimatic record demonstrates that severe (long-lasting and/or deep) drought conditions have episodically struck the Southwest (Stine 1994; Woodhouse et al. 2010; Asmerom et al. 2013); and the most severe droughts on record were linked to years in which low winter precipitation was followed by a weak NAM (Griffin et al. 2013). The MCA coincided with a period of exceptionally quiescent volcanism and a natural uptick in solar irradiance (Bradley et al. 2016), forcing mechanisms that likely contributed to the relatively high drought frequency (Metcalfe et al. 2015; Ault et al. 2018) during the MCA. Although the MCA was certainly a hemisphere-wide phenomenon, the patterns of prevailing temperature and hydroclimatic conditions varied quite a lot from place to place.

Tree ring reconstructions show that the Sierra Nevada (mountains) on the western edge of the Great Basin, for instance, was warm during the MCA, with a thermal maximum 1150-1169 CE (Graumlich 1993). The Great Basin was consistently even with or warmer than the millennial average over the MCA (Reinemann et al. 2014; Salzer et al. 2014). Temperatures over the Colorado Plateau were likewise greater during the MCA but relatively more volatile (Salzer and Kipfmueller 2005).